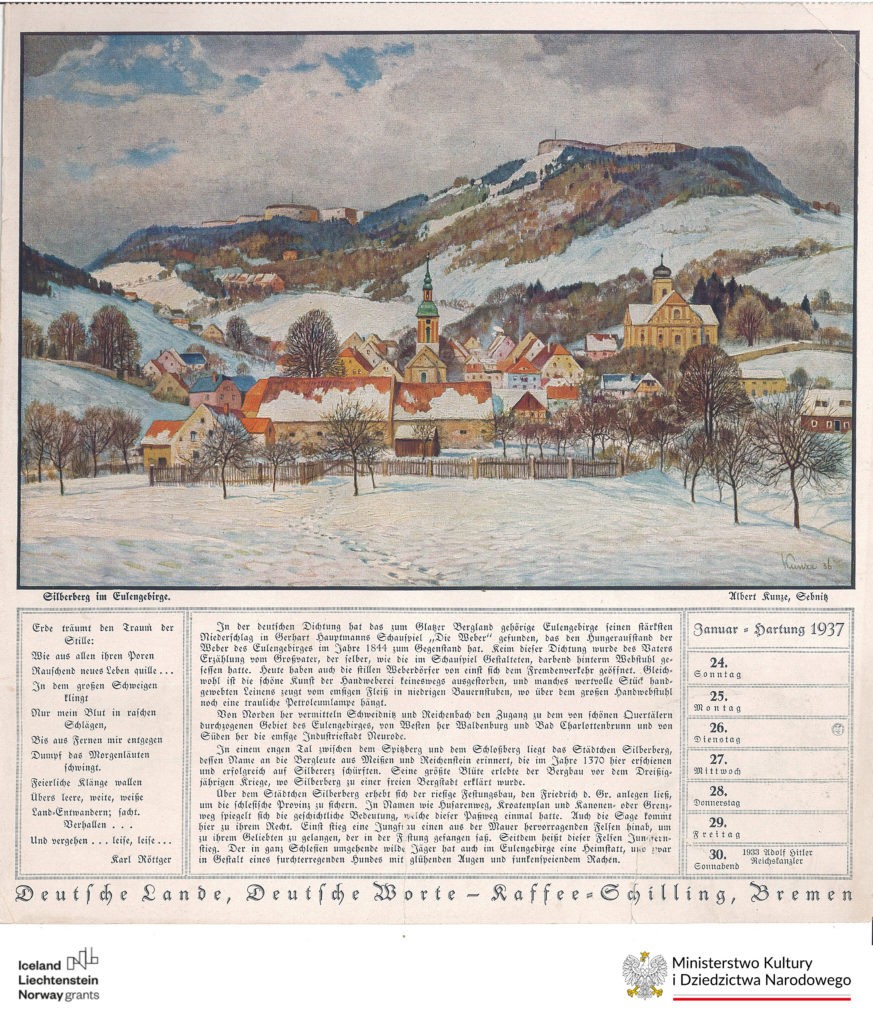 Ebay has supplied us with a page from the calendar….
We move to the Silberberg in January 1937….
Apart from a beautiful illustration suitable for another Silberberg tattoo, we can translate such interesting facts:

“In German poetry, the Owl Mountains – which belong to the Klodzko region – find their strongest expression in Gerhart Hauptmann’s play “The Weavers”, which depicts a hunger rebellion of the Owl Mountains weavers in 1844. The origin of this work was a story told by the writer’s father about his grandfather, who himself, like the weavers depicted in the drama, sat behind a loom, suffering privation.
The formerly secluded weaving villages have now opened up to tourism. However, the beautiful art of hand-weaving has not disappeared, and many valuable specimens of hand-woven cloth bear witness to the industriousness of the inhabitants of squat peasant chambers, where a friendly paraffin lamp still hangs over a large loom.

Access to the Owl Mountains, criss-crossed by beautiful valleys, is provided to the north by Świdnica and Dzierżoniów, to the west by Walbrzych and Jedlina-Zdrój, and to the south by the bustling industrial town of Nowa Ruda.

In the narrow valley between Ostrog and Warowna Gora lies the town of Srebrna Góra. Its name recalls the miners from Meissen and Zloty Stok, who arrived here in 1370 and successfully prospected for silver ore. The heyday of local mining came before the Thirty Years’ War, when Silver Mountain was also granted town rights.

Above the town of Srebrna Góra rise massive fortifications, which – to secure the Silesian province – were ordered to be erected by Frederick the Great. The names Husarenweg, Kroatenplan, Kanonenweg and Grenzweg reflect the historical significance of this pass. A legend also appears here. Once upon a time a girl climbed a girl over a rock protruding from the walls to reach her beloved, who was imprisoned in the fortress. Since then, this rock has been called the Jungfernstieg (Ladies’ Path). The Owl Mountains are also home to a ‘wild hunter’, roaming the whole of Silesia, in the form of a terrifying dog with glowing eyes and a mouth that spits sparks.”

Should anyone accidentally see and experience contact with a sparkly dog – please let us know.

Many thanks to Prof. Tomasz Przerwa for the translation.

Together we are working for a green, competitive and inclusive Europe.

The project ‘Revitalisation for cultural and educational purposes of degraded and inaccessible parts of the Silver Mountain Fortress Historical Monument’ is implemented within the framework of the EEA Financial Mechanism 2014-2021.